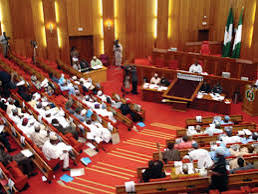 The Senate on Thursday agreed the sum of $1 billion from the Federal Government share of Excess Crude revenue be devoted to the immediate completion of the Ajaokuta Steel Company. The Nation newspaper reports.

The Upper Chamber also said all monies that may from time to time be appropriated and authorised by any tier of government should be part of the funding for the completion of the company.

It said all loans or grants from time to time made to the country for the purpose of completing the Ajaokuta Steel Company should be accommodated.

This followed the adoption of the “Ajaokuta Steel Company Completion Fund Bill, 2018 passed by the Senate yesterday.

The Bill slated for concurrence, was presented by Senate Leader, Senator Ahmed Lawan.

The proposed legislation stated the monies in the Fund shall be applied by the minister subject to appropriation by the National Assembly only for the purpose:

(b) The acquisition of land and of any right or interest in or over land and in respect of the use of any invention.

( c ) The carrying on of any survey, research or investigation preparatory to the under taking of any such purpose as is referred to in paragraph (a) and (b) or the formation of any plan or scheme for the development, improvement, of Ajaokuta Steel Company project.

Deputy Senate President, Ike Ekweremadu, who presided, said that the Bill if signed into law would go a long way to facilitate the quick completion of the Ajaokuta Steel complex.

The Senate also adopted the Presidential Programme on Rehabilitation and Reintegration (establishment and implementation) Bill 2018.

The Bill provides legal instrument to implement the Presidential Amnesty programme in the area of disarmament, demobilization and reintegration.

No Cabal Can Hijack Atiku If He Becomes President – Ex-Kogi Governor
Nigeria Has Not Produced Leaders Like Obi And I Since 1960 – Atiku Abubakar.