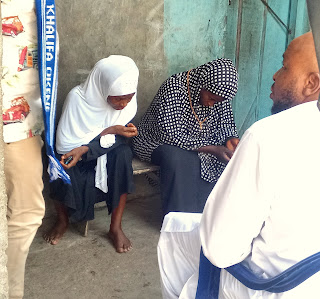 Distinguished Khalifa Abdulrahaman Okene has promised to sponsor the education of the three orphans left behind by Late Kekere Abdulmalik Itopa, one of Ebira foremost comic actors.

The philanthropist made the promise on Sunday when he visited the bereaved family at their Kuroko residence in Adavi Local Government Area of Kogi State.

Recall that Itopa died on November 25th, 2018 after a chronic heart disease which had him bedridden for days.

Khalifa Okene in his words, eulogised the parts played by the deceased through the Ebira Entertainment Industry as his own contribution to the development of Ebiraland.

He condoled with the two widows, and pledged to support each of them with N200,000 for their businesses.

He stated that his foundation, Khalif Cares Foundation will henceforth be responsible for the education of the orphans.

Speaking on behalf of the family, Ebira Movie Producer and Director, Hon Mario appreciated the visitation and gesture extended to the family.

According to him, amongst all those they had reached out to, Khalifa was the first to pay such visit to the family, an indication that he bears the burden of his people.

He sympathized with the parents of the deceased, praying for the fortitude to bear the loss.