Two people were killed and seven vehicles burnt in a multiple accident that involved five trailer trucks and two J5 buses on the Okene-Lokoja road. 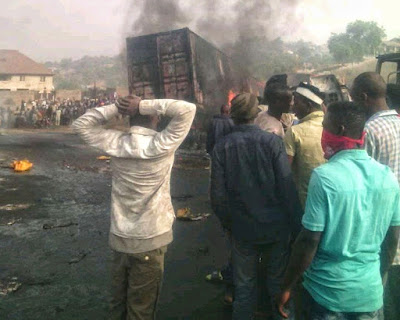 Daily Trust reports that the accident which happened at about 11:00 pm yesterday, at old Zango-Idakoivo slope on the Okene-Lokoja road, had all the seven vehicles burnt to ashes. The two victims of the accident were burnt beyond recognition while others who sustained varying degrees of burns were rushed to the hospital for medical attention. The incident led to traffic gridlock as travellers plying the route were forced to park their vehicles.

Eyewitnesses said it took officers of the FRSC from the Okene Unit Command, supported by members of the community, several hours to put out the fire from the burning vehicles.

Speaking on the incident, the Okene Unit Commander of the FRSC, Dr. Adelaja Ogungbemi, explained that the multiple accident was caused by a brake failure from one of the trailers which lost control and ran into several other vehicles, adding that the impact of the accident ignited the fire that engulfed all the vehicles involved.

He said officers of his unit did all they could before they were able to put out the fire by 10am on Wednesday. He then assured that his unit was making efforts to clear the obstruction created to allow free flow of vehicles.

He also charged road users to ensure that their vehicles are in order before they put them on the road. Dr. Adelaja expressed hope that both the Federal and Kogi State Government would make efforts to fix alternative routes in the area before the yuletide period to ensure free flow of traffic.