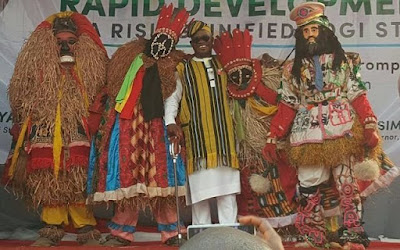 Following the assassination of Mr Yusuf Adabanege, the custodian of “Aneku Sementy,” a traditional masquerade in Okene Local Government, the Kogi State Government has put the celebration of Ekuechi Festival on hold.
The Administrator of Okene Local Government, Engr Abdulrazaq Muhammad made this known in a Press Statement, being  the resolution of the government as part of measures put in place to prevent further breach of security.
According to the Council Boss, night activities, celebrations and gatherings have also been halted.
“The government and security agencies have put machineries in motion to arrest the perpetrators of this heinous crime wherever they may be and bring them to justice, therefore, government wish to plead with supporters and associates of the deceased to remain calm and be peaceful despite the pains, agony and emotional trauma they currently go through over the unfortunate incident,” he said.
Muhammad enjoined residents to “go about their normal and legitimate businesses but be vigilante and report any suspected persons or group to the nearest security agency.”
The deceased was reportedly ambushed and assassinated by unknown gunmen on Friday while returning home from rehearsal, in preparation for the outing of his masquerade earlier billed for next week.
Addressing the people earlier on Saturday morning, Governor Yahaya Bello sued for peace, while assuring that government will stop at nothing to bring the perpetrators of the crime to book.