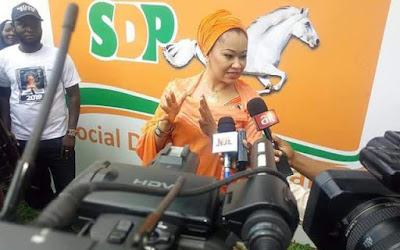 A front line aspirant for the central senatorial district of Kogi State in the forthcoming general elections, Natasha Hadiza Akpoti, has said that her major policy trust when elected as Senator would be the revitalization of the Ajaokuta Steel complex and all other ailing Steel companies in Nigeria.
In a statement made available to newsmen in Lokoja on Saturday after obtaining the nomination form of the Social Democratic Party (SDP), Akpoti noted that a functioning Ajaokuta Steel complex was capable of generating huge employment opportunities to the citizenry, high revenue generation to the country,  technology  transfer among other benefits.
In addition to the efforts she has made so far in creating awareness about the company and the steel industry in Nigeria , she said more still needs to be achieved in the areas of Steel laws, establishment of Steel authority and ensure that the necessary political will is engendered.
“When I stood against the privatisation of the Ajaokuta Steel Company, I did so because of my firm believe that the company holds the future of our country. When I become a Senator I will not only work for the resuscitation of Ajaokuta Steel complex but all other Steel Companies in Nigeria that will use the product of Ajaokuta Steel as raw materials and the country would be better for it,” she said.
On why she has decided to venture into politics this time around, the social rights crusader, said her constituent have been marginalized from the necessities of government when it comes to social Justice and economic development.
While noting that the people have been absolutely neglected in the scheme of things in the country, she however said that the people have now realized that government and governance is far away from them and there is the need for someone who is committed to their wellbeing to bridge the gap.
“I am stepping into politics of the Central senatorial district of Kogi State to bridge this gap, so that I can make the difference, be the voice of the voiceless, provide support for the weakest in  the society and the most marginalized people of Nigeria.”
She said in addition to right to life as enshrined in the constitution, she will in addition advocate for rights to portable water, good roads, quality education adequate healthcare delivery and inclusive governance which she said the SDP stands for.
“As a woman, will also advocate for huge women participation in politics. Women have made their marks in the cooperate world, it is time for opportunities to  be given to the women to take charge of leadership positions.
She said the reason why she opted for the Social Democratic Party (SDP) to actualize her senatorial ambition was because the manifesto of the party is in line with her personal philosophy of service to humanity.
Akpoti reafirm her commitment to social justice and freedom for all human as it is enshrined in the constitution of the Federal Republic of Nigeria 1999 as amended.
According to her, “the reason why we have settled down for the SDP to deliver our mandate is that I have taken time in the last three months to study the manifestos of all the political parties and we found that of the SDP as the one that tally with our aspiration.
She noted that the philosophy of the party resonates with her ideas of politics, adding that her father was one of the founding members of the party who worked closely with late Moshood Abiola to promote the party and by default “l have always been a social democrat at heart.”