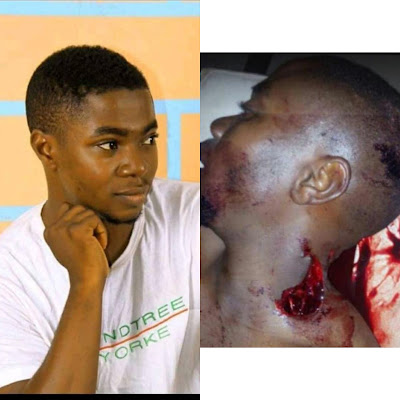 Perhaps, after the celebration of his birthday on Tuesday, he was all hopes and rejigged to get a grip of his dreamt future, unknown to him that his untimely death awaited.
Currently viral on social media is the picture of Ali Umar Sheriff, a 300 level student of Kogi State University reportedly stabbed to death yesterday by another student who is currently at large.
Sheriff as he was popularly called was a student of the Department of Philosophy, and described as one of the students’ favorite photographer.
Sources who linked the incident to a cult activity said the attack happened at the late hours of Thursday when the deceased was returning from his studio located at a student lodge named Millionaire Quarters.
Sheriff who was deeply stabbed in the neck reportedly died at the school clinic.
Share on Whatsapp Share on Facebook Tweet
Tags: KSU Violent
Share on
Share on Facebook Share on Twitter Share on WhatsApp Share on WhatsApp

A young girl is in pain after her aunt/guardian poured hot water on her body, leaving her with burns.