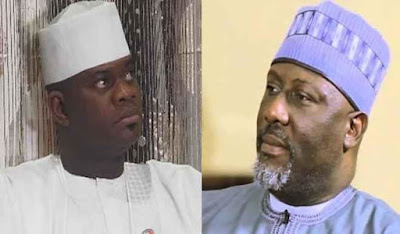 I know lots of flak will be thrown but like the Distinguished Senator always say, either you say the truth or not, death is inevitable.
On inauguration, a sacrilege was committed when a padded outcome was attributed to God by the Senator though he knew one of God’s commandments is “thou shalt not bear false witness” On the same day the Distinguished was shouting himself hoarse and dancing Azonto on the podium, Gov. Yahaya Bello called him the ‘hero’ of Kogi’s democracy.
Deep thinkers knew the collaboration will soon hit the rocks with dire consequences for the state. Was Distinguished Senator Melaye’s position that day borne out of patriotism? Not in the least! It was all about greed and inordinate ambition. Lie started lying to lie and deceit commenced deceiving deceit.
Shortly after, the bubble busted and the mansion built with spittle collapsed when faced with the dew. Though Senator Melaye claimed to be blind then, it will be a slap on the wrist if he gets away with his monumental indiscretion that has placed Kogites in their present pitiable condition. Karma is here and SDM must pay for his ‘sins’ which his present travails in the hands of the Lord of Lugard House represents. If it takes incarceration to purge SDM of his blasphemy, so be it.
On the part of Gov. Yahaya Bello, immunity is not forever at least the predicament of Ex-Governors should be instructive. Karma just like the vulture is extremely patient.
The Elephant sharing narrative is extreme lack of initiative in display because Kogi State presently does not even have a Buffalo to share. While Gov.Yahaya Bello will continue strutting all over the place with his walking stick after discarding the crutches, his adopted twin brother is on overdrive milking the state dry through avenues ponzi schemers are adept at.
There is no packaged divine arrangement that can erase the anguish of Kogites in the hands of a government Kogites never asked for or deserved. Kogi State is notorious for sending incumbents packing after which the full course meal prepared by Karma will be served those who collaborated and foisted this callous, deceitful and directionless administration on Kogites.
Chief Edward Onoja is hyperactive on social media obviously in jubilation over the conspiracy that is responsible for Sen. Dino Melaye’s current travails and as certain as dawn will break after the darkness of every night Karma will eventually visit Chief Edward Onoja.
Attempting to play God is sacrilege but there is no harm being a mouthpiece of a god but ultimately, Almighty God reign supreme. ‘Fret not thyself because of evil men, neither be thou envious at the wicked: is a divine passage I cherish because ‘Soon they fade away like grass and disappear’
Certain elements within the police hierarchy are exhibiting signs of being compromised and acting out an obviously prepared script. As stated earlier karma will take its toll amidst regrets.
– Posi Botun
Share on Whatsapp Share on Facebook Tweet
Tags: Bello Senator Dino Malaye
Share on
Share on Facebook Share on Twitter Share on WhatsApp Share on WhatsApp

The Need for Ebira Women Involvement in Political Appointments