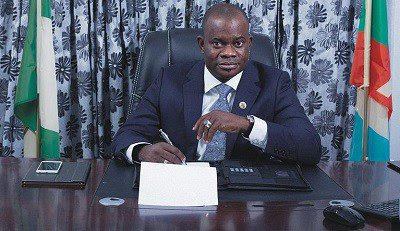 The paramount ruler of the Igala people, Dr Michael Ameh Oboni II on Friday said Gov Yahaya Bello has succeeded where his predecessors who are of the Igala extraction had failed.

The Attah Igala made the remark when he led a delegation of traditional chiefs to thank Gov Bello for lifting the ban on certain traditional festivals in the land.
The monarch said due to overzelousness by some people, certain Igala festivals were banned over 65 years ago. He said that despite the fact that state had been led by three former governors, who came from the Igala region of the state, none of them did anything to revive the festivals.
“Governor Yahaya Bello is one that understands the value of culture and when he came, he felt something was missing and chose to act,” Dr. Oboni said. “Culture is everything. Our language, attitude, proverbs, way of cultivating farms are all ways of expressing culture. Some of our culture lost its potency and became adulterated.
“We are happy someone has come to wipe our tears. Our festivals were erroneously proscribed and we pray for those who did it to be forgiven. We are here to show our appreciation to the governor for lifting the ban.”
He also praised the Governor for not allowing his youth to hinder him from delivering the dividends of democracy to the people, despite the many political distractions he encountered daily. He said it was clear that Governor Bello is determined to leave Kogi State much better than he met it.
“The development he (Governor Bello) has started in our area is unparalleled in the annals of the history of that area,” the monarch said. “Even if he stops there today, you have done more than any other person who has  come before. We should be grateful. He is a very young man. Some of them are old enough to be his father but what did they do?” 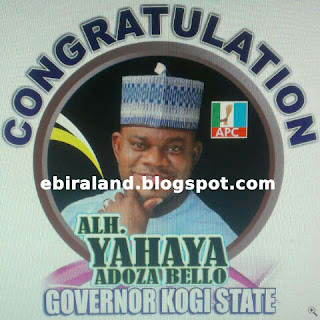 “For bringing us out of the dungeon and into the light, forever and ever, the Igala people will never forget you.”
Responding, the Governor said he was happy that his dream to unite Kogites across religious and ethnic lines was coming true. He said the various projects embarked upon by his government are On going, despite the lean purse.
“I am not here to play politics with the lives of the citizens of Kogi State,” Governor Bello said.
“Given what we have done in two years, we have been getting good results. But, we felt something fundamental was missing. We identified that thing as the core value of our identity. We have concluded that whatever landmark achievements we have in terms of projects, programmes and policies, we would not have desired results unless we revive our cultures and traditions. We have achieved that to a great extent, hence the lifting of the ban on the rich and proud culture and festivals of the Igala Kingdom. These were banned years before my birth. I pray that they will foster unity and development in our state.
“I am happy to announce that all the people from the three senatorial zones now see ourselves and one indivisible entity. I urge everyone to note that we must come together to celebrate this culture.”
He lampooned successive administrations for neglecting this very vital aspect of life and blamed this neglect for the rise in crimes in the youth as they no longer respect traditions. He said he looked forward to the first festival to be organised by the traditional leaders, saying such events would boost the economy of the people.
He thanked the monarch for continuously preaching unity and love to all in the state. He assured that all On going projects would be completed within his first term.
“I want to announce to you, Your Royal Majesty, that the road from Shintaku to Gboloko that crosses Bassa to Dekina and spores to Ayingba will be handled by Julius Berger. We are going to give you the best in your Kingdom because the Igala people deserves the best.
“Also, before the end of the first term, the Kogi State University Teaching Hospital, Ayingba, will be built from scratch to completion and well equipped. I assure you that the College of Health Technology, Idah, will be revived and given the structure and equipment it deserves.”
This announcement by the Governor put paid to speculations that the state government had planned to relocate the College of Medicine to the Central Senatorial District of the state.
Governor Bello promised to continue to be fair and just in all he does while in office.
Share on Whatsapp Share on Facebook Tweet
Tags: Attah Igala Bello Festival Igala
Share on
Share on Facebook Share on Twitter Share on WhatsApp Share on WhatsApp

Ebiras Vs Igalas: The Etymological And Scientific Truth About Ownership Of Ajaokuta, Lokoja

The Ebira people had their origin from Yemen and settled first at Wukari at the Kwararafa Kingdom of the present day Jukun community in Taraba state, Nigeria.