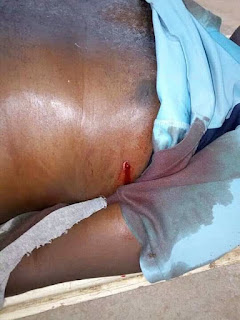 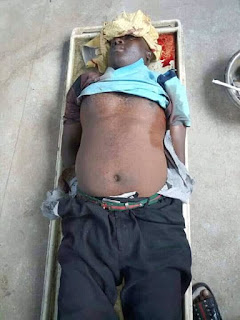 Source disclosed to Ebiraland Media that, this occur when suspected arm men known to be SARS officers whit a milk color Siena car, appeared at Nyama Nyama Junction of Ganaja Village, where an accident happened between a bike man and a girl selling beside the road.

According to the source that disclose this news to us (Ebiraland Media), the bike man pleaded guilty and promised to take the girl for treatment along side the manager of BB umar cattle market, who happened to be an eye witness of the incident. Also pleaded on behalf of the bike man, and all of a sudden the arm men appeared with their car and went in an argument with the people around on how the incident happened. Later it was noted that one of the SARS officers got angry and opened fire on the BB Umar cattle market manager, which leads to his death.

The man that's said to be a well know Ebira man from Kabbawa area of Lokoja, and after the death of this man some mob of angry youths blocked the main road and started destroying things and threatening lives. As a result of this the Police are said to have reinforced from there office to the area and their has been exchange of gun fire between the youths and the police men many have been indoor and businesses have been on halt since then.

Please share with your friends so that they can be careful and also so that Government can intervene in the situation..

Pharm. Asuku VS Ebira Christians – All You Need To Know.

With over 1 million people globally infected, the world has begun facing the reality of the novel coronavirus which causes the disease, COVID-19.

Top 20 Ebira Words That Means Something Else in Another Language.