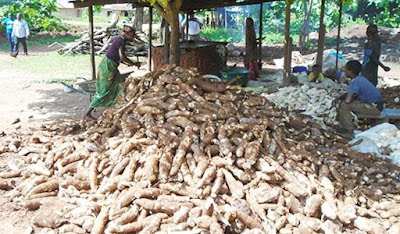 The Kogi state government on Monday said it had concluded plans for the establishment of a “cassava city” in Osara, Adavi local government area of the state to expand the financial base of the state.
The Managing Director of the Kogi Agricultural Development Project, Oyisi Okatahi, who made the disclosure in Lokoja, the state capital, said the city would contain the entire value chain of cassava, including farmers, agrochemical and equipment dealers, extension agents, processors among others.
He added that the city would be powered by with off-grid Solar energy with various amenities like residences, clinics and educational institutions.
According to him, the Osara cassava city was  the first in Kogi State to be built under the Fair Agric Project (FAP) with the aim of promoting cassava planting and further diversify the economic base of the state.
He explained that the Osara community had already donated a large expanse of land for the project, saying the land would be given out to cassava farmers free.
Okatahi said the state already had two cassava processing companies with a combined capacity of 2,500 metric tonnes with only 10 percent available in the state.
He said, “Land is free of charge, there is also an opportunity to receive subsidy inputs like fertilizers and herbicides. Also available is insurance to mitigate against risk. All you need to do is apply online or at our head office or any zonal office. We shall pre-qualify you. No need for connections it is based on first come first serve basis.
“Kogi is the number one Cassava producer in Nigeria. Cassava is high in demand today, we already have two major processing companies UNICANE and Crest Agro with a combined daily capacity of 2,500 MT whereas they can only source about percent. Moreso, a tonne of Cassava is priced between N20,000 – N26,000. At these prices, you can get 80-100 percent return on your investment in 10 months.
“We want our people, particularly the youths to take their destinies into their hands, if you can’t find a job, this is an opportunity to create one. Don’t wait for the perfect condition or for someone to spoon feed you. Stop complaining, arise, be proactive. Partner with your friends and see if you can form a cooperative and cultivate even one hectare together”.
He said the state governor, Alhaji Yahaya Bello, was committed to the success of agriculture in the state, adding that he was dedicated to creating jobs and opportunities for the youths, women and farmers.

Difficult Words In Ebira Language You Should Know.

How To Use Bitter Kola (Oro) In Preventing Food Poisoning and Spell Destruction.

Photos: The Most Beautiful And Handsome Faces Of The Month June 2016 In Ebiraland.

APC Accuse Dickson Of Plans To Decamp To Its Fold: Bayelsa