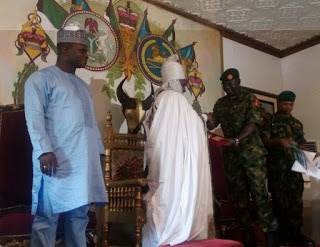 The Chief of Army Staff, Lt.-Gen. Tukur Buratai has said that the deployment of Special Forces to Kogi in 2015 has helped in reducing terrorism, kidnapping and armed robbery in the state.

Buratai made the remark on Saturday in Okene during the inauguration of a Forward Operation Base (FOB) for the Nigerian Army.

The facility, located on the busy Okene-Okpella highway, is sited to enable the army quickly deploy its personnel and equipment to tackle any form of criminality in Kogi.

The army chief said the special forces were deployed to the area when the state became rallying point of terrorists in 2014.

Buratai, who was represented by Maj.-Gen. Rasheed Yusuf, Commander, Training and Doctrine Command, thanked the Kogi Government for the construction of the facility and the support it had been rendering to the army.

In a remark, Gov. Yahaya Bello, who inaugurated the facility, said available statistic had shown drastic reduction in acts of terrorism, kidnapping and robbery in the state, following security measures adopted by government.

Also Read: Army Barack In Okene: From Insecurity To Adultery.
The governor, however, said it was not yet “Uhuru” and called on the Minister of Defence to set up a Joint Task Force to tackle security challenges in the state.

Bello said that this was imperative as Kogi serves as gateway to 10 states, including the FCT.

He disclosed that the state government had spent over N200 million to construct the bullet proof army base, and donated various equipment to security agencies in the state.

Bello commended the army for its efforts in reducing criminal activities in the state.

Obege and the Revolution of Herbal Medicine in Ebiraland.

List of Clans in Ebiraland and the Towns & Villages They Dominate (Iresu Et’ebira)...