The Kogi Government says it will feed 181,000 pupils in primary four to six to complement the Federal Government’s feeding programme for public primary schools in the state. 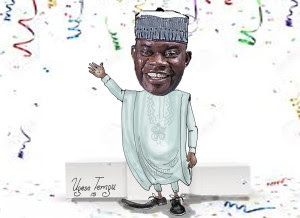 Adoga Ibrahim, the Special Adviser to the Governor on Multilateral Donor Agencies and Special Projects, disclosed this in an interview with the News Agency of Nigeria (NAN) on Saturday in Lokoja.
Ibrahim said the State’s Governor, Yahaya Bello, in his magnanimity had offered to feed pupils in primary four to six to complement the Federal Government’s efforts, since they were not included in the plan.
“The Federal Government would cater for a meal per day for 195,000 pupils from primary one to three, while Kogi government would feed 181,000 pupils in primary four to six across the 21 Local Government areas of the state.
“No fewer than 376,000 pupils from primary one to six in 2,100 public schools in Kogi will benefit from this partnership between the Federal and Kogi Government.
“We want to have the best home grown school feeding programme in Kogi; we are getting technologies that will effectively enhance our drive.
“This home grown school feeding programme would commence in Kogi hopefully by April.
“We are sending the working and technical committee to Osun State in the next few weeks, to understudy what they are doing there to enhance our performance.
“We will have a good structure that will enable our children to be well-fed nutritionally, and equally ensure that “ghost children are not captured.’’ Ibrahim said.
The special adviser said that the programme would revive public schools as well as to encourage parents to enroll their children in schools for better and quality education.
He said that the programme would also empower farmers, reduce poverty and illiteracy at the grassroots.
Ibrahim added that the state government would also provide free set of school uniforms and pair of sandals for the pupils, in batches, starting with the state capital.
The home grown school feeding programme is part of the Federal Government social investment programmes to give a meal per day to pupils in public schools from primary one to three.

Greetings In Ebira Language And The Meaning (Translation In English)

Obege and the Revolution of Herbal Medicine in Ebiraland.