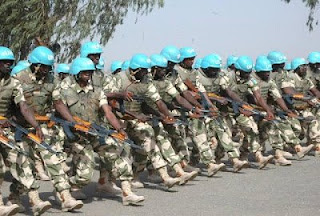 On the backdrop of the violent attack at the Rivers state High Courtpremises on Tuesday, the Nigerian army has announced that troops of the 2 Brigade of the Nigerian Army, Port Harcourt, have arrested 17 cultists and armed robbers.

According to the spokesman of the 2 Brigade, Captain Eli Lazarus, the army arrested the alleged criminals during its operations at Ahoada East, Ogbogoro in Obio/Akpor, Omoku in Ogba/Egbema/Ndoni, Omuonwa and Isiokpo in Ikwerre LGA.

High caliber ammunition, arms, dynamites and military uniforms were recovered from the cultist.

Please Don't Forget to Share This Article With Your Friends Please Use The Below Share Buttons, Send Articles, And News To Ebiraland.com Whatsapp: +2348168374589. email: binoosmart@gmail.com.

Scientist Recommend Asthma Plant (Irevuku in Ebira) As Herbal Remedy For or COVID-19.

What Is The Meaning Of Okene? See Why Okene Town Is Called Okene

Take Advantage Of High Dollar, Why Blogging is the Best Job for Girls?