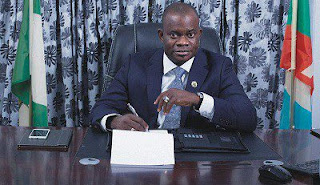 Justice Mohammad said the parties concerned will be
communicated with the date five days before the judgment date.

Among other reliefs sought by Faleke is that INEC should withdraw Certificate of Return given to Bello.

Faleke, who was the running mate to the late Abubakar
Audu, the candidate of the APC in the November 21, 2015 governorship poll in Kogi State has also asked the Election Petitions Tribunal to declare him Governor-elect.

In documents filed before the Tribunal by his counsel, Hon.

Faleke is seeking 12 reliefs, including four orders
compelling the Independent National Electoral Commission (INEC) to reverse itself on several decisions concerning the November 21 polls as from the day Audu died.

Among the reliefs being sought is a declaration that the
election to the office of governor of Kogi State of November 21 was valid and that he should be presented with a Certificate of Return as the lawful winner of the election.

Faleke argued that the supplementary election of December 5, upon which Yahaya Bello was declared as governor-elect, was unnecessary.

He argued that Bello was not qualified to contest in the first place.

In the petition which he submitted to the clerk of the
Tribunal at about 12.20 p.m. in Lokoja, accompanied by Mohammed Audu, son of the late Audu, Faleke listed INEC and Bello as first and second respondents respectively.

With 25 documents attached in support, Faleke listed two grounds for his petition; the second respondent (Bello) was, at the time of the election, not qualified to contest, and was not duly elected by the majority of lawful votes cast at the election.

Faleke also observed that INEC "did not publish any list of candidates who purportedly participated at the
supplementary election held on December 5, 2015".

He said Yahahya Bello scored only 6,885 votes at the
supplementary election held on December 5, far less than the 240,867 votes he (Faleke) and Audu got on November 21.

Faleke added that INEC added the scores of Dec. 5, to the one of Nov. 21 to get the 247, 752 "which it eventually announced before wrongly and unduly returning the secomd respondent as the winner of the election."

He continued: "The second respondent did not register as a voter in his ward and/or at all for the governorship election in Kogi State. He did not nominate or submit to INEC any candidate as his associate for his running for the office of Governor of Kogi State as mandated by the Constitution."

Top 20 Ebira Words That Means Something Else in Another Language.

See What is Happening To Zariagi Community, Adavi L.G.A of Kogi State.

Did Think You Needs a Boy To Be Happy Then Read This.